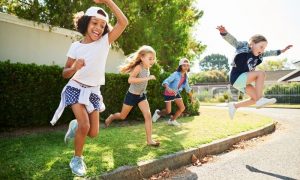 There are many benefits of playing outside, and although many kids don’t do it as much as they should, it’s always a great idea to point out the good that comes with it.

I am part of the generation of kids that were able to play outside, run all over the neighborhood and beyond, and still managed to come home safely to my parents.

My parents didn’t have to worry much about where I was or what I was doing, as I was with the neighbor’s kids.

Things were a lot different then, and there are many reasons why kids don’t play outside.

Regardless of what is going on with the world today, there will always be benefits of playing outside.

Sometimes we need a reminder, but a lot of the time, it’s just something we don’t think about often.

Without questioning anyone’s intelligence, here are the benefits children have of playing outside.

Benefits of Playing Outside

There are many benefits of playing outside, but I’m not going to mention them all.

I may or may not add to this list later, but I think the ones I’m going to talk about are worth mentioning.

I remember the days of opening the door to my house and going outside to play as if there was nothing to worry about.

This happened daily, and I can’t believe it did now that I look back on those days.

You can still do the same today, but it’s not something you should do unless you’re there to supervise your kids.

When done safely, there are all kinds of benefits of playing outside and why you should give your kids that opportunity.

If there’s one benefit of playing outside, it will be health-related.

According to the State of Childhood Obesity website, roughly one in six young people in the United States have obesity.

It might sound alarming to some of you, but it’s more obvious than you think.

Kids these days don’t go out as much as they used to, so playing outside is a must.

They can pick up a hobby, play a sport, or build forts and camps like we used to back in the day.

Getting that body moving and heart pumping is beneficial for your child’s health, and you bet that it’s just as vital for yours.

2. Playing Outside Helps With Immunity

The more you are exposed to something, the more immune you become.

We were put here by dirt, and dirt is used to grow our food, so I don’t see the problem with dirt.

Some people get dirt mixed up with germs, and it causes a lot of parents to keep their kids indoors.

Let them go outside and play with dirt, as it is beyond beneficial to their immunity.

They’ll be used to everything nature has to throw at them, and it will help them become less sensitive to other things.

Kids these days are so uncoordinated it’s not even funny.

Forget about learning how to ride a bike at four years of age, as kids learn when they’re five and older.

That’s because they don’t go outside enough.

There are many reasons kids don’t play outside anymore, but it does not mean they shouldn’t.

Even the nerdiest kid in our squad knew how to throw a ball, and they still found the will to compete.

Kids will be kids.

That’s a saying that I’m not very fond of and agree with.

The problem I have is that they are kids, and they will do kid things, but it does not discount the poor parenting behind the bad behavior.

If you want to be a better parent, it will not help if you try to run away from responsibility.

It will help if you do your job and show kids how to behave.

But, anyway, back to kids and their character.

When kids play outside, it allows them to explore everything around them.

It creates this person they will become as they learn how to deal with everything that comes with playing outside.

5. Gets the Creative Juices Flowing

You learn many things from playing outside, and you won’t notice it until you actually look at what it has done for you now.

As a kid, I played outside all the time, and it has helped me with the many things in life now.

I am not your Picasso, but I can do a good basic job drawing and assist with my kid’s projects.

I can relate it to my interests, but I remember how I used to be with twigs, dirt, leaves, and other natural resources when I look back on my childhood.

I built camps, did some superb “pottery,” and developed a huge appreciation for nature.

This will do the same for our kids, so remember that this is one of the better benefits of playing outside.

If you have a daughter like mine who jumps off the walls (literally), this might not be the best thing for your kid.

However, most of today’s kids are stuck on their PS5, iPad, or some kind of device, and it’s hurting them.

Not only are they increasing the chances of being obese, but it’s making them lazy.

They sleep late, wake up late, and 20 hours of sleep isn’t enough.

Break the poor habits and get your kids outside for healthy kids with lots of energy.

7. Playing Outside is Fun

When we think of the benefits of playing outside, we think of many negative things about their physical health, just like everything I’ve already mentioned.

What we tend to forget is that playing outside is fun.

Not just fun, but it gives kids the opportunity to clear their minds from the crazy things of the world.

They can break free from the stress they deal with, especially with all the digital uneasiness that most parents don’t know about.

Conclusion – There Are Many Benefits of Playing Outside

Playing outside is always fun.

There are many outdoor activities for kids, but just an open field and some fresh air are always great.

Although it’s not the best idea to let your kids roam free outside these days, make it a point to get them out under your supervision.

If you’re like me and make your living as a stay-at-home dad, bring your laptop outside, a beach chair, and kill two birds with one stone.

I hope these benefits of playing outside help your kids and, most significantly, you, as the parent.

I’m sure you have many other benefits to add, so please share your thoughts in the comments section below.

WonderFold Wagon Review: 7 Things You Need to Know
Next Post:Wealthy Affiliate Review: 21 Facts to Know in 2023