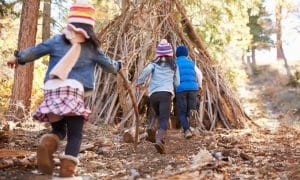 We all want our kids to be more active.

Having them play video games and watch YouTube all day isn’t the best thing for them, and if you’re anything like me, it gets quite annoying.

We want them to get up and get out.

Go and enjoy the great outdoors, just like you used to do when I was a kid.

But hold on, just a minute there, mom and dad.

We have the Coronavirus craziness, and Ummm, we’re in the middle of a pandemic.

There are many reasons why you’re kids aren’t doing the things you once did when you were their age, and I want to share them with you today.

So before you go barking orders to your children about not playing outside enough, let me show you some of the reasons as to why they aren’t getting out more.

Contents show
Why Kids Don’t Play Outside Anymore
1. Things Aren’t the Same
2. Too Much Going on
3. Technology
4. The Pandemic
5. It’s Not Safe Outside
6. Parents Are Too Busy
7. Parks and Playgrounds Are Limited
8. Lost Skills
9. Limited Resources
10. They Just Don’t Want to
So, Why Don’t Kids Play Outside Anymore?

Why Kids Don’t Play Outside Anymore

I love being outside, and my kids do too.

The problem we have is that we stay in a condo, and we don’t have the luxury of playing in a backyard of some sort.

We don’t get to dribble a basketball when we want to, and we don’t have one of the best swing sets to jump on when they get bored.

Sure, that’s a good enough reason not to play outside, but we do with what we have.

We like going to parks and playgrounds, and we have other extracurricular activities we enjoy.

Not to mention soccer practice five days a week, the occasional golf outing, and the activities done at school.

There’s a lot that we do, but there’s a difference when it comes to just playing outside, and these are the reasons why.

If I was to sum everything up into one reason why kids don’t play outside anymore, it’s as simple as things aren’t the same anymore.

The world we live in is very complicated, with everyone being more on the selfish side of things.

Everyone focuses on themselves that everyone else has to deal with it.

Imagine how everyone is too focused on themselves and how they’re all thinking and doing the same thing.

Now, imagine if everyone was to think of someone else and how things would be.

That’s not the case, though, and yes, kids have to suffer from the bad examples and not being able to go outside.

I know it sounds crazy, but this is the main reason kids don’t play outside anymore and why many things are messed up in the world today.

2. Too Much Going on

Life is hectic for most.

You have school, sports, clubs, hobbies, and many other things around which we revolve our lives.

Call it necessary, but it’s nothing more than a way to fit in and/or be a part of what everyone else is doing.

In turn, the kids have to suffer once again, and it hinders their want and desire to go outside and run around.

If you want to be a better parent, start by looking at all the extracurricular activities you have going on, and you’ll see that you don’t need to do any of them.

This leads to the most popular reason why kids don’t play outside anymore.

I can’t entirely agree with this one, as kids should not be the ones to blame for not being able to play outside.

Sure technology seems to have them in a chokehold, but is it really why they don’t go outside to get some physical activity?

My kids are on their devices and play video games, and they could stay on there all day if I allowed them to.

And even if I asked my kids if they wanted to go outside, they would rarely say no.

So think about things for a bit, and you’ll see that technology is definitely awesome, but it’s you that needs to take control and bring them outside.

Although most may think it’s why kids don’t play outside anymore, think again.

The pandemic is undoubtedly a huge reason why kids don’t play outside anymore.

It’s not a secret, and even us adults have to deal with it.

We can’t fill restaurants like we used to, we can’t go to school normally, and we can barely travel.

What more to allow kids to play outside with their friends?

The pandemic is a huge reason why kids don’t play outside anymore, but hopefully, all that changes with some restrictions being lifted.

5. It’s Not Safe Outside

This is one of the biggest reasons kids don’t play outside anymore.

Things aren’t the same anymore, and you can bet that safety is one of them.

No longer are kids allowed to go outside as they please without parents worrying about their safety and well-being.

Who wouldn’t worry with more than 3,500 kids and teens being shot each year?

Safety is a big concern, whether at school, the mall, or even right outside our houses.

It’s a sad time to live in, but if you’re anything spiritual like me, you’ll know that this system of things is coming to an end.

6. Parents Are Too Busy

We live in a time where the prices of anything are beyond expensive.

And although gas prices for each state may vary, those prices affect everyone.

Who would’ve thought that it would take $100 to fill up a gas tank?

This is just fuel for our cars we’re talking about, too, as groceries’ price and overall living are also insane.

What does this mean for parents?

It means more hours away from home to make ends meet.

Then, of course, kids have to suffer, which is another big reason they aren’t able to play outside.

Before getting eight more jobs, consider these tips on saving more money each month instead.

7. Parks and Playgrounds Are Limited

Playgrounds are a great place for kids to exert lots of energy.

Some of you might have a Spimbey, but most will have to resort to your local park or playground.

For the latter, it’s not easy to find a nice place for the kids to play as our people are destroying them.

It’s crazy to pass by basketball courts with no rims and playgrounds with yellow caution tape wrapped around them.

As much as we want our kids to get out more, our resources are limited.

That saying may apply to actual things, but you can use it for today’s generation of kids.

Have you ever sat down to see what they’re watching on YouTube?

I know you hear things here and there, but actually sit down and see how the people in these YouTube channels act.

If it’s not bratty or selfish, it’s both.

Grown adults are teaching the world to act the way it does, and although it’s unfortunate, it’s something that we have to deal with as parents.

This attitude leads to more device time and the lack of want to go outside for real playtime.

My family lives in a condo, and we don’t have a yard.

We go to playgrounds and whatnot, but we still enjoy outdoor fun.

We don’t get nearly as much time as we should, but we do something, even with limited resources.

Not all families are the same, and not everyone has a public park right outside their front doors.

This limitation doesn’t help our kids and is another reason they don’t play outside anymore.

I know I’m usually against blaming the kids for a lot of stuff, but sometimes I forget that some kids aren’t like others.

I’m sorry if you have a kid who doesn’t want to play outside.

This might just be one of those reasons as to why kids don’t play outside, but hopefully, your child creates the next best thing.

If they make money online or something, you might not have to work anymore.

Just a thought, but definitely possible.

So, Why Don’t Kids Play Outside Anymore?

Let’s just say that there’s not one specific reason, and everyone’s situation is different.

This leads to our lifestyles and why kids are stuck inside the house.

However, this does not mean that they can’t play outside.

Acknowledge some of the reasons on this list and make some adjustments.

Not to say that kids need to go outside every day, but do try to find some time to get them outside for fresh air and exercise.

I know there are many other reasons why kids don’t play outside anymore, but I’m sure ten is enough.

If you have any you would like to share, feel free to drop them in the comments section below.

Top 3 Best Affiliate Marketing Courses That Work in 2022
Next Post:7 Legit Ways to Make a Living as a Stay At Home Dad