Dyson V7 Review – Pricey But Worth It

This Dyson V7 review is mainly for the motorhead, but I will be comparing it to the Absolute model as well since they are very similar.

I know you’re probably on the fence about buying such an expensive product as there are many things to consider before buying your next vacuum.

Just like most of you, I sat on this for weeks, and all that waiting didn’t do much.

Now should you buy the Dyson V7, or is there something better, and perhaps, more affordable?

So many questions come with such a simple product, that requires lots of thinking.

And just like some of you, your better half was sold on the color of this vacuum alone.

That pink or purple or like they call it “fuchsia,” along with the modern look, is not the easiest thing to resist.

Damn you, Dyson, for knowing how to grab the modern parent’s attention!

With lots to consider and maybe even some pressure to buy, let’s see if the Dyson V7 Motorhead is as great as all the reviews say.

As for me, I’ve purchased, messed around with all its components, and put it to the test.

Within two weeks of owning this vacuum, I want to show you what I liked and what I didn’t like about the Dyson V7 Motorhead.

Without further ado, let’s get right into things. 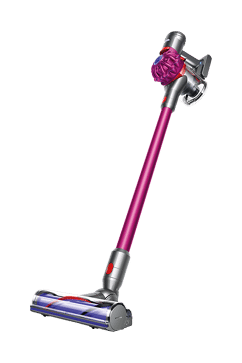 The Dyson V7 cordless vacuum gave me so many mixed feelings when I first used it.

Battery life sucked, but there were so many other things to love about this vacuum.

After several weeks of use, I have finally concluded that this is one vacuum worth buying.

It’s the most affordable of Dyson’s line of hand-held vacuums, and it does one heck of a job.

What Makes The Dyson V7 Worth Buying

Let’s just say you might do a lot of sitting on things before you make the purchase.

That’s cool and all, but sometimes we just need to take the plunge.

I ordered this thing online (because they sold out) and got it sent to the store so I can just pick it up there.

Then I go back a couple of days later, and voila!

There is one Dyson V7 Motorhead vacuum, sitting there waiting for me to take her home.

So I do end up buying that one, and I am still waiting on the other one to arrive.

I was going to get a refund, but I have two buyers that want to buy it from me instead.

So, before you go getting yourself tangled in some kind of situation as I did, let me show you all the reasons as to why you might just need the Dyson V7 Motorhead. 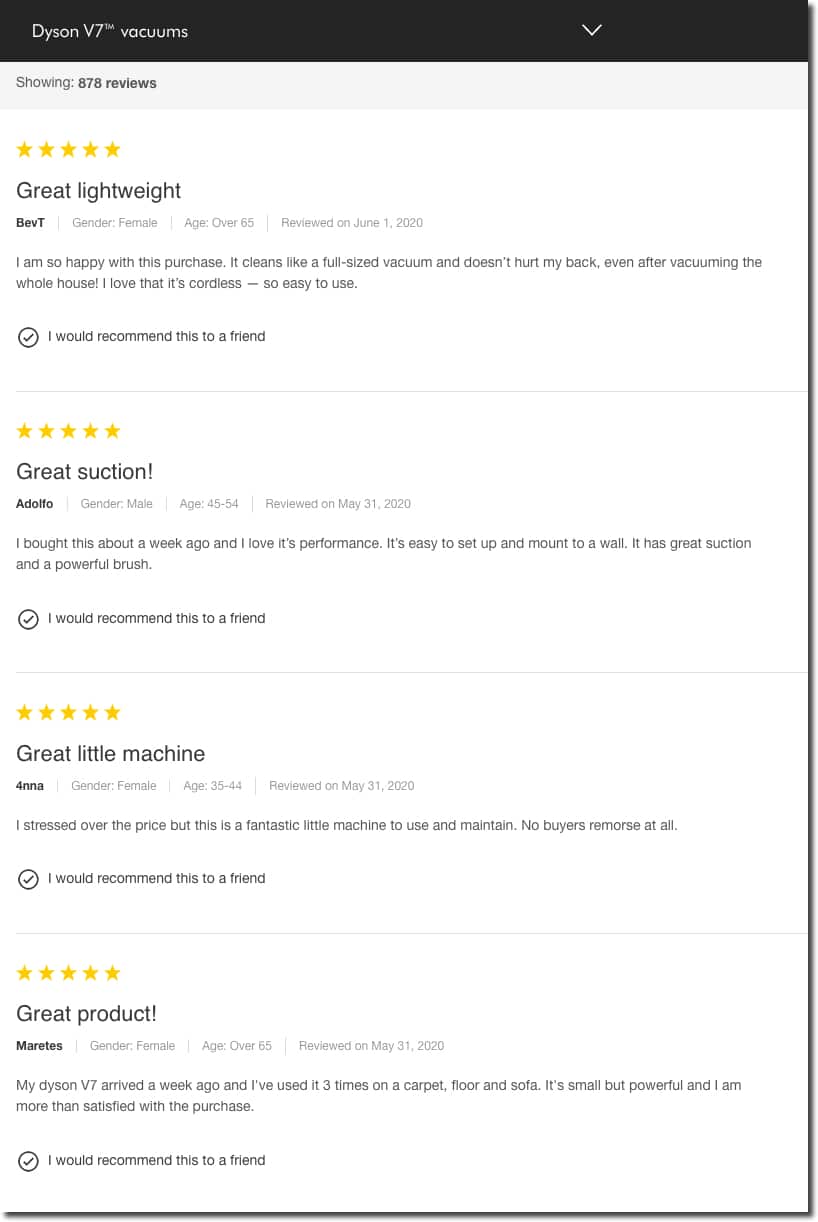 When you first see the Dyson V7 Motorhead online, you see nothing but stars.

Everyone and their mothers have given this vacuum a perfect rating.

Most have even gone as far as to recommend it to others.

Now, 1-20 ratings is still a hard way to gage anything, but when you have 800+ scores, things are a little clearer.

Whether you go to the official Dyson website, Amazon, or any of your favorite stores, you will see tons of positive Dyson V7 reviews.

Allow me to explain. 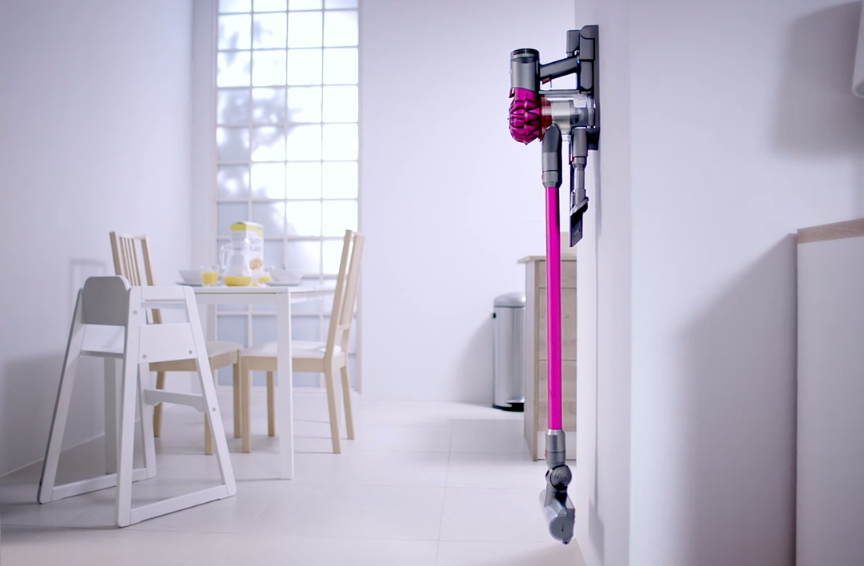 I’m no woman, but I’m sure a lot of you can agree that this is one of the better-looking vacuum cleaners on the market.

That dang fuchsia and gray give you that modern look.

But what I’m referring to most is how this little appliance adds a touch of design to your home.

Well, at least that’s what the marketing does because I know most of you will not have a home, as you see in the image above.

That’s the beauty of marketing and something we might just have to deal with for as long as we live.

Little do you know, it’s simple things like this that make you “pull the trigger” when deciding on something so pricey. 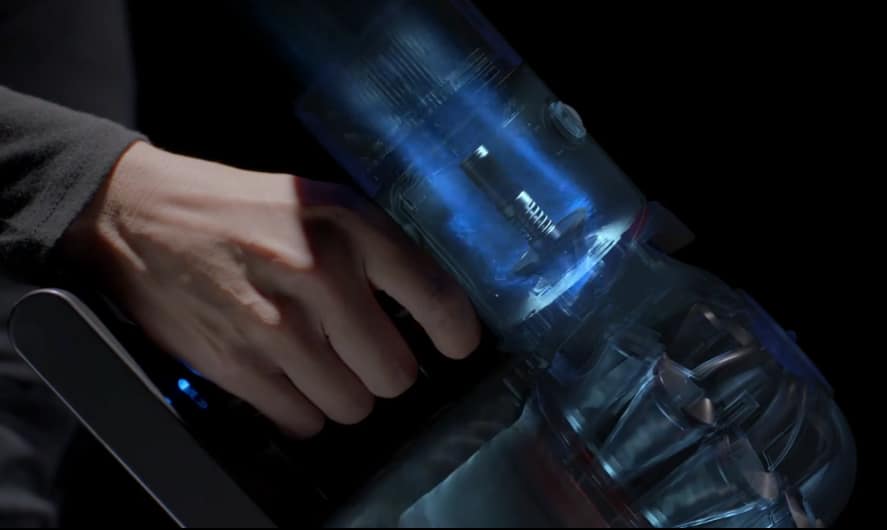 When you think about vacuums, there’s one word that comes to mind.

And no, it’s not fuchsia.

You think about how strong that vacuum can suck and if it can keep up with the daily mess that comes with living in a house, especially with carpet.

Without that reliable suction power, what good is all that fancy marketing crap?

Not good at all, and especially not for hundreds of dollars.

In today’s vacuum world, you are dealing with lots of competition.

For a hand-held vacuum, not many others can compare to the power of the Dyson V7 Motorhead. 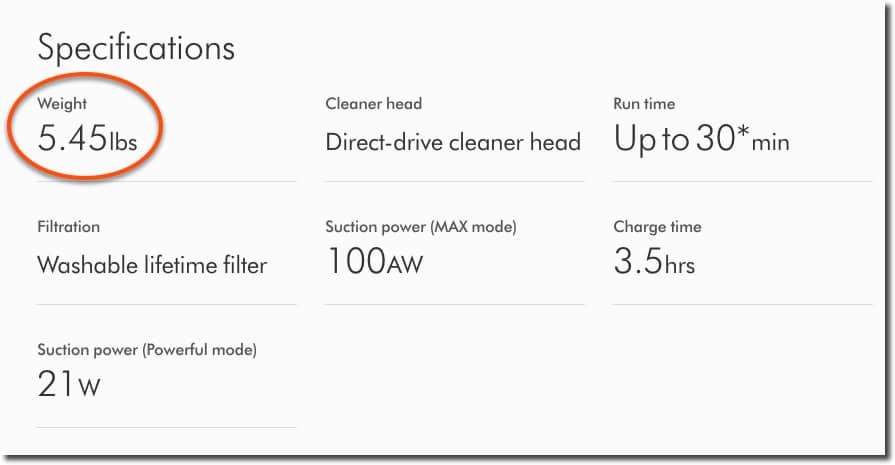 Let’s just say that my barely 4-year-old daughter can use this vacuum.

The Dyson V7 Motorhead weighs just 5.45 pounds, which is just about as much as she weighed when she was born.

Now with its design and sucking ability, it glides so smoothly that it feels no more than 2 pounds.

If lightweight is what you want, the Dyson V7 is your gal. 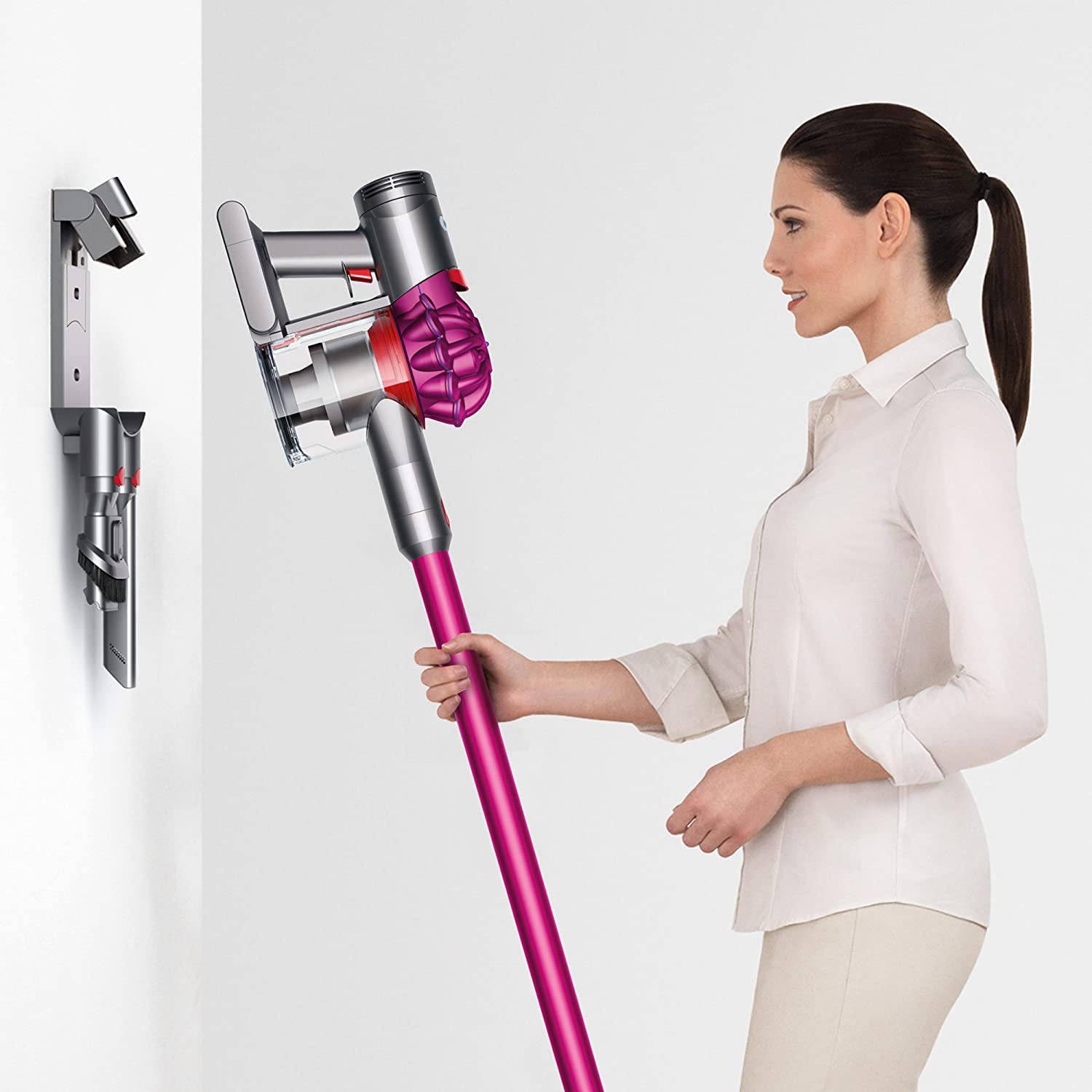 The Dyson V7 itself is already a super simple machine.

But what I really like is the docking station.

Not only does it store your vacuum, but it does two other things that I like.

One, it charges your vacuum while it sits there and two, it allows you to show your vacuum off to anyone who comes to your house.

Trust me, everyone talks about this vacuum, and that’s because of its dock.

Oh, and of course, its colors. 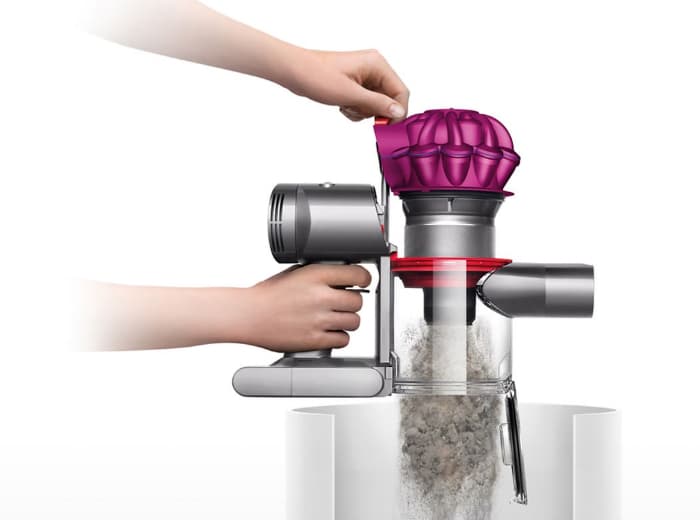 Talking about vacuums and bags is and has been a thing of the past for quite some time now.

Most young adults know nothing about bags, and future generations will probably never know about them either.

Anyways, cleaning the Dyson V7 is a piece of cake.

You pull on the dumpster release, give it a little shake, and close her up.

It’s that simple, and one of the many reasons to love the Dyson V7 Motorhead. 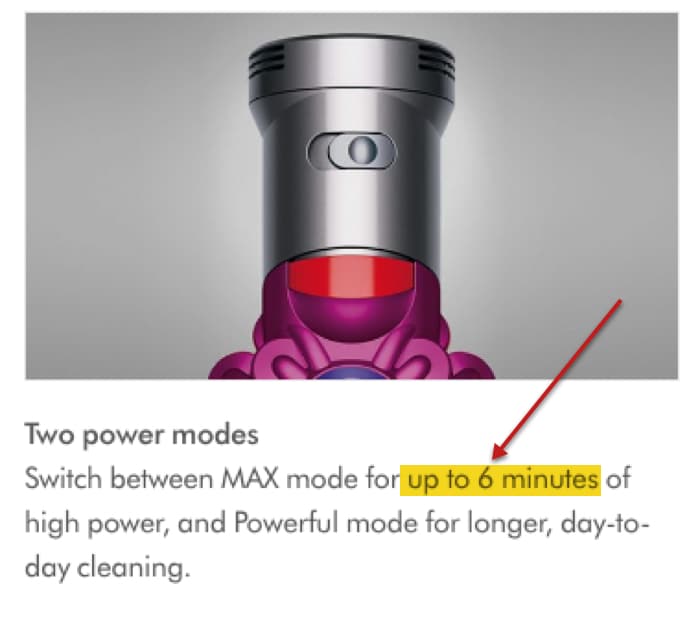 It’s not easy to find any product that has everything you need, and that includes the Dyson V7 Motorhead.

You’ve seen or heard it before, and you’re going to hear/see it again.

The Dyson V7 Motorhead’s battery life sucks just as much as the vacuum does.

I know they mention “up to 30 minutes,” but that’s farfetched and not likely.

Unless you put it on the lower setting, without any attachments, and the weather being perfect or something.

But expect to get no more than 30 minutes’ worth of use, as this thing will not last that long.

And if you’re going to use the Max setting, you better stretch as you will need to clean in a hurry.

Expect no more than 7 minutes with that setting.

Don’t feel discouraged, though, as no cordless vacuums ever last long anyways.

Cordless vacuums last for 15-40 minutes, so don’t think that any of them can last for hours.

The Price & Where to Buy

I know the Dyson V7 Motorhead vacuum is not the cheapest, but with what it can do, plus a sweet manufacturer’s warranty, you will not regret anything.

On average, you can find the Dyson V7 Motorhead for around $250.

The site does price it at $299 but get it cheaper and shipped faster on Amazon, especially if you are a Prime Member.

Many stores have the Dyson V7 Motorhead, and the prices are all very close.

Most stores do price-matching, so remember that if you do find yourself about to spend over $300.

Now, how much you should spend on a vacuum is all dependent on your budget and what you’re willing to pay.

If you have the flow, don’t waste any more time and get yourself a Dyson V7 today. 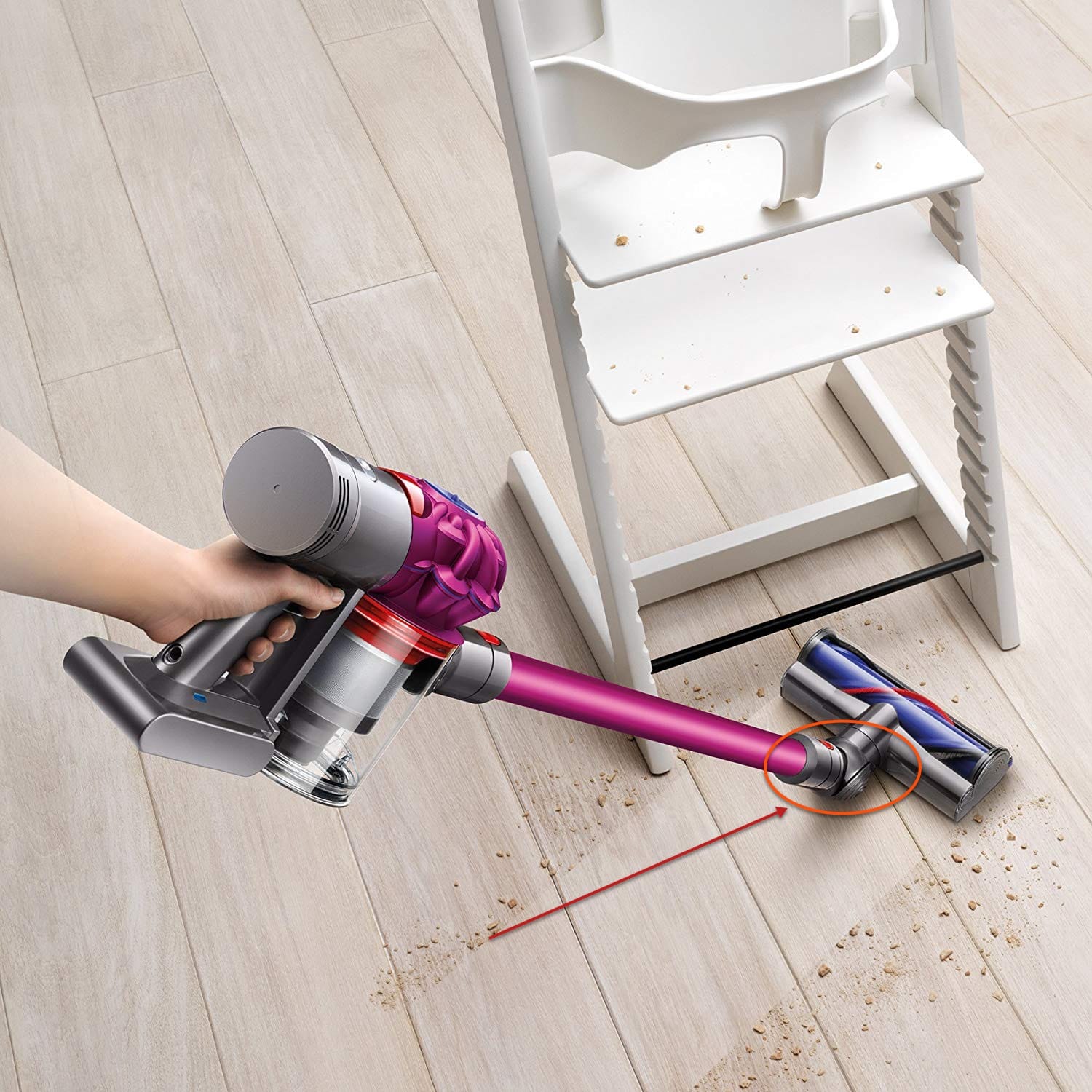 There are all kinds of raving reviews from V7 owners, but of course, nothing is perfect.

I already mentioned the fact that the battery does not last for crap, but at least Dyson does not try to hide it.

It is a portable vacuum and charges once you put it on the docking station.

Another thing you need to know is that this vacuum is not the best if you own some wood floors.

It’s said to leave scratches from the little ball.

Lastly, if you own the previous V6 model, do know that you won’t be able to use the tools as they are entirely different in size.

Oh, and please don’t forget to register your Dyson, as it should come with a two-year warranty.

The Dyson V7 is very impressive, and I am pleased with our purchase.

However, it’s a great thing to know that the V7 is the baby sister of three other Dyson hand-held vacuums.

Being the baby of the bunch means the V7 is “lacking” in several departments.

The first thing that separates it from its siblings is that it is the weakest sucker of the four.

That might be the case, but I don’t see any significant suction power difference unless you are comparing it to the Dyson V11.

Besides that, the V7 has more suction power than probably any other hand-held vacuum out there.

The next difference is going to be battery life.

So if you want an extra 10 minutes of sucking, you can go up a model.

So unless you are willing to spend more than $600 on a vacuum, the V7 will do the job and is about as far as I recommend you go.

I must say that the digital screen with the V11 can be enticing, but give it a couple of years, and even their lowest end vacuum will have one.

Overall, the Dyson V7 Motorhead is one that you will not regret.

Whether you are preparing for a new baby or dealing with toddlers and soon to be teens, this vacuum will get the job done.

I was a bit hesitant to make the purchase because of the battery life, but I’m glad I did.

All that waiting only meant we had to deal with our $40, Black Friday vacuum that was heavy and lost its suction power.

So if you’re in the market for a new vacuum, looking for something better, or looking for that perfect gift for the Misses, the Dyson V7 is it.

Well, that’s about it.

I hope this Dyson V7 review has been of some great help to you in making a better decision.

If you have any questions, feel free to leave them in the comments section below, and I will get back to you as soon as I can.

Thanks for reading and happy cleaning! 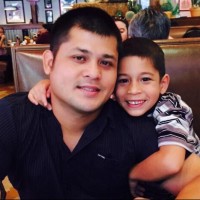