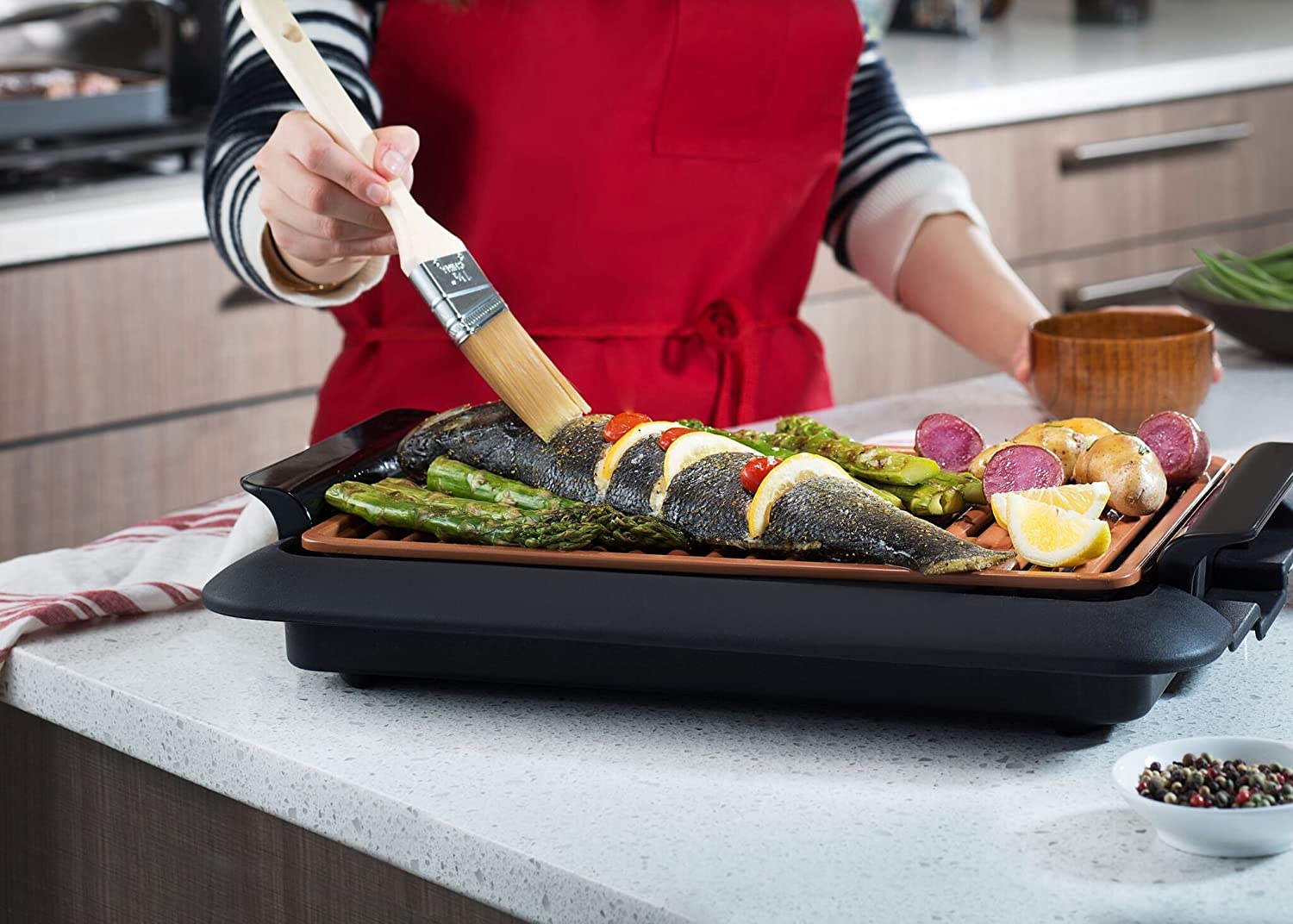 I’m sure you have tons of questions about this product, especially with the fact that it comes from As Seen on TV land.

Does it really work?

Is it really smokeless?

Can it grill a steak to perfection?

And last but not least, is it actually worth buying?

Those are the same questions I had before I made the purchase but there were other factors that work against people like myself.

For one, I’m a complete sucker when it comes to As Seen on TV products.

Not because they are all awesome and I believe they work either.

I’m just the type of person that needs to try it for themselves before believing the actors or even other consumers.

Two, I love to grill.

I mean, I know we all do but I’m the type of guy that is willing to throw some fully-cooked sausages on a grill when they could easily be boiled or thrown in the microwave.

Now the last thing that got me curious about the Gotham Steel smokeless grill is the claim of it being “smoke-less”.

I have never grilled indoors but I sure do love eating at some Korean restaurants that do.

Every grilling sesh I’ve had has come with smoke.

And lots of it at that.

That’s one of the reasons I like grilling, to begin with.

But when it’s cold and rainy, what can you really do?

That’s when the Gotham Steel smokeless grill comes into play.

Those three simple things are what made me purchase the Gotham Steel Smokeless Grill, so you’re welcome in advance for those of you who don’t need to spend any money just yet.

Now before you go believing what you see on TV, let’s keep that credit card in its home.

Let’s see what the Gotham Steel smokeless grill is really about and if in fact, it does what it’s supposed to do.

Where to Buy: Check it Out Here

The Gotham Steel smokeless grill is not too shabby but it does have its flaws. The claims aren’t that true but at the very least, it’s pretty portable and will cook your food properly. The price is kind of a turnoff for some, but I think it’s fair only because it can be used as a regular griddle as well.

What is the Gotham Steel Smokeless Grill?

The Gotham Steel smokeless grill is an indoor grill that allows you to cook inside your home without all the smoke that comes with your typical grill. It is made from titanium and also comes with a nonstick surface. It weighs around 5 pounds and comes ready to go right out of the box.

The grill is an As Seen on TV product, so you know it comes with lots of exaggerated craziness.

However, this specific product does get 4/5 stars from many of its users.

So those actors might just be telling the truth.

Let’s get right into this Gotham Steel smokeless grill review and we shall see just how great (or not) this product really is.

When you deal with products you see on TV, you can’t help but focus on what they claim a product can do.

With Gotham Steel, there are several that almost have you believing, to the point where you will just pull out your credit card.

Thankfully so, you’re on this Gotham Steel smokeless grill review so you can see if these claims are in fact true.

These claims are not unbelievable but are some things that will trigger your buying decisions.

For this Gotham Steel smokeless grill review, I want to debunk such claims as they too were the main reasons I was even interested in this product, to begin with.

Grilling and not making smoke is as good as saying that you have real fog-less goggles or glasses.

Being a veteran in the Army, I was introduced to military-grade gear and more than often came across such a thing.

That was never true and that’s the way I see it with grills.

The Gotham Steel smokeless grill is not smokeless but it does not emit lots of smoke like an ordinary grill.

Well, it’s all thanks to their “cooling drip pan” that stops that fat from burning and smoking.

With this grill, the smoke only comes from the food you are grilling.

So to answer the question on whether or not the Gotham Steel grill is actually a “smokeless grill”, I’m going to have to say yes.

Compared to other so-called smokeless grills, I can say that it does a much better job.

Not to mention the wording and fine print on the box.

They don’t really mention “smokeless” but rather “smoke-less”.

So I guess you can say that they aren’t lying.

Is the Gotham Steel Grill Nonstick?

This is one claim that is actually true.

The Gotham Steel smokeless grill actually did what I saw on TV and I was actually impressed.

Bacon, burgers, cheese, and even plastic all came off of the grill without a problem.

Put those things on there and they slid around as they should.

Steaks and fish were the ones I was kind of concerned about but those slipped around as they did on TV.

So is the Gotham Steel smokeless grill really nonstick?

I’m going to have to say yes.

Now whether or not this nonstick surface will last can only be done through the test of time.

For now, it works.

Is the Gotham Steel Smokeless Grill Easy to Clean?

Surprisingly so, it is really easy to clean.

The instructions tell you to clean the grill after it’s done cooling down.

That’s not usually what I do with all the pots, pans, and grills I use as they usually clean better when they’re still hot.

I get a pretty thick cloth or folded paper towel and I wipe the mess right off.

For the sake of this Gotham Steel smokeless grill review, I actually decided to follow instructions.

I let the grill cool down a bit and then tried to wipe it clean.

Not believing that it would be as easy to clean as they claimed it would, I was actually proven wrong.

I just wiped the grease off and washed it like I would with any other nonstick cookware.

That’s what I did and put it right back in the box, as it still looks brand new.

Do not use any abrasive type sponges as you will wear out its nonstick surface.

Use the right cleaning sponge and you should be good to go.

Besides that, cleaning the Gotham Steel smokeless grill was a breeze.

The Price & Where to Buy

The retail price for the Gotham Steel smokeless grill was about $89.99 but these days you can find them even cheaper.

Prices vary from different places and can sometimes be bought for a lot less if they are on sale.

You can find some deals online as well as Walmart, Bed Bath and Beyond but you have to catch them.

Amazon has them for around $69.99, so you might want to check them out.

Especially if you are a Prime member.

Check it Out Here

Some people are content with this product and some think it’s great.

Others think otherwise and are actually even upset.

“Look for another griddle”

That last one is quite hilarious and

Out of almost 400 Gotham Steel Smokeless grill reviews, it averages 4 out of 5 stars.

That’s a really high number and one that I think sums up this grill.

However, there are always going to be negative reviews of any product.

People are either too critical and hard to please or flat-out displeased with a product.

“Look for another griddle”

That last one is quite hilarious and one that makes you wonder what other grills are actually out there.

Are there any better smokeless grills?

There are others but I don’t know if they are any better.

There are others that I would recommend for specific reasons.

If you are in the market for something bigger, I think you’ll like the George Foreman Indoor/outdoor electric grill.

It’s an actual grill that comes on a stand (not a tabletop), so you can have that feeling of doing some actual grilling.

Now the only other reason I feel the need to get a different grill is because of the price.

For under $20, you can get the satisfaction of being able to grill indoors.

Don’t expect some crazy quality but rather a grill that is beyond affordable and can get you grilling.

The Gotham Steel smokeless grill is not a bad product but of course, it has its flaws.

Its nonstick feature is a good one and I also think that it does great at keeping smoke to a minimum.

The cleaning part is also true and overall, I think it’s not a bad buy.

Try to find the deals out there and try to get it for a lower price.

Remember that it does come with a griddle, so you can replace the el-cheapo griddle that you have with Gotham’s nonstick copper looking version

Having the griddle can knock off about $30, so you can think of buying this grill for like $50 bucks.

I think that’s a fair price and the same reason why I would recommend this grill.

Just like the Egg Sitter cushion, this grill is one of the better As Seen on TV products out there.

I do hope this Gotham Steel smokeless grill review has been of some great help for you though.

If you have any questions, feel free to leave them in the comments section below and I will get back to you as soon as I can.

Now for those of you who have tried this grill, your thoughts?

Overall I think the Gotham Steel smokeless grill is not a bad buy. I love the fact that it is actually nonstick and although not smokeless, will not trigger your smoke alarms. I mean, what did you expect when you are going to grill some fatty burgers and steaks? For that reason alone, I think this is worth buying. Check it Out Here

3.5
Category: HouseholdTag: As Seen on TV