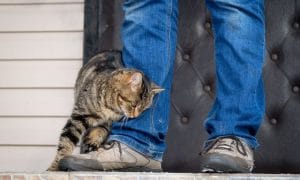 5 Reasons Why Cats Rub Against Your Legs

Ever wonder why your cat goes straight up to you and walks right against your legs as if it were some deer scratching on a tree?

Cats rub against your legs because they are hungry, are vying for your attention, or they want everyone to know that you are their owner.

I know it’s not something you think about or understand, but there’s a lot more to know about our feline friends.

There isn’t just one reason why cats rub against your legs either, and that’s why I want to show you why such behavior exists.

So before you go cursing because you almost stepped on Sparkle, let’s see why cats rub against your legs in the first place.

Reasons Why Cats Rub Against Your Legs

You should know certain things before getting a cat, and them rubbing up against your legs is one of them.

They will go up to you, rub against your legs, and even push their heads against you as if they were a bull.

As mentioned earlier, there is a reason why cats rub against your legs, and I want to detail further why this occurs.

Let’s save you the stress from your cat blocking your path to making your morning cup of coffee and let’s talk about why cats rub against your legs.

1. Your Cat is Hungry

Sometimes when your cat rubs against your legs, you probably want to punt them as if you were going to hit a game-winning field goal.

Cats are animals, and they most likely want a scoop of their favorite kibble.

Grab the scooper, put some food in their bowl, and you should be free of leg rubbing.

But, what if you feed them and they still try to rub against you?

Good thing cats rub your legs for more reasons than one.

2. They Want Some TLC

If you’ve already fed your cat and they still feel the need to rub up against your legs, there’s another reason your cat is still wanting to irritate you.

Some of you might have a cat that wants nothing to do with you.

They want to roam the house as if they own it, and they don’t want any petting.

Yet, they still rub up against you, and you don’t know why.

If not, there is another reason why cats rub against your legs.

3. They Are Claiming Their Territory

If you have more than one cat, expect one of them to rub up against you more than the other.

We have two cats, and it’s always the more dominant of the two that does the rubbing.

If they’re hungry, the least dominant cat will do more meowing rather than rubbing.

She doesn’t do any leg rubbing, but she will walk on the couch, meowing for our attention.

This cat likes petting, and that’s what we have to do.

4. Time to Scoop Some Litter

Just like how your baby needs a diaper change, cats need one too.

Only with cats do you not need any wipes or diapers.

You just need to scoop some litter and put it in a litter genie.

Unlike dogs that scratch on a door when they need to go, cats just do their thing in a litter box.

It’s a lot easier to handle, and if done daily, you won’t get much leg rubbing because of their need for a litter change.

5. Your Cat Misses You

Most cats can be sleeping, but once they hear a noise outside, they will come running as if they had any business being there.

Then they find you, and it’s time to rub on you as if they wanted you to land on your face.

Every step you take requires you to try not to step on them, although you might get the occasional step on their paw.

Then they hiss at you like it’s your fault.

Before it gets to that point, give your cat a pet on his head because sometimes they just want you to know that they miss you.

Notice that most of the time, your cat will rub against you when you get home.

They miss you, and like any child, they want you to know that.

Conclusion – There’s a Reason Why Cats Rub Against Your Legs

Like us humans, cats have their needs and desires.

They don’t want anything fancy, and a nice rub up against your legs is fine with them.\

I know that having your cat rub up against your legs all the time can be irritating at times, but just remember that they are doing it for a reason.

And hey, I’d rather have them rub up against my legs than have them walk on my face when they’re hungry.

Cats will be cats, and leg rubbing is just one of their things.