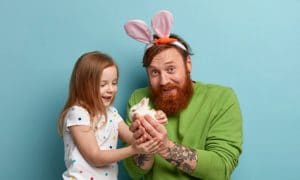 5 Legit Reasons Why Dads Are So Weird

There isn’t one specific reason why dads are so weird, and I’m cool with that.

But, why are they so weird to begin with?

Typing that raised an eyebrow, and I immediately got defensive.

Then I got back to my senses and realized that we are weird for a reason, as dads.

We do things differently.

Heck, we probably smell differently, too.

Think whatever you want to think, about dads, but there’s a reason why others might think we are weird.

So, Why Are Dads So Weird?

That’s a very loaded question, but I have figured out 5 reasons as to why this is even a topic.

It’s not the biggest deal, but at the very least, I want to show you why these dads have changed.

Every family has at least one weird person, and in most cases, it’s the dad.

There are several reasons why this is so, so let’s get into them now.

I’m sure you have your thoughts, but I’m trying to keep this list to a minimum.

If you want to share your favorite reason, you can do so in the comments section below.

For now, these are the 5 reasons why dads are so weird.

As a new dad, you have more important things to worry about.

You have other humans that you created that need you to be there for them.

Regardless of what used to be important, you can’t just go and do them.

This, in turn, makes you a weirdo and is the biggest reason why dads are so weird.

Forget about buying clothes for yourself every week and going out to the bar, like you have nothing better to do.

It’s straight home after work, joining all the other dads who have this new responsibility.

In most cases, though, it’s normal.

For their friends that are so used to having them at their disposal, not so much.

This new life then leads to other parts of why dads are so weird, but just remember that this once cool friend of yours is now just a weird dad.

I remember having my first kid.

I mean, who doesn’t?

But, I do remember seeing the changes in myself immediately.

I know, gross, but that’s one of the changes I made immediately, and I guess you can say it’s another reason dads are weird.

I also gained weight for some odd reason and I guess you can say that physical fitness wasn’t up on the priority list anymore.

The dad body became a part of who I am, and don’t think that I’m going to accept it.

I will lose my dad bod, I’m just going to need a little more time.

Lastly, I stopped caring about buying all the materialistic nonsense.

That was a waste of time and I’m glad my kids taught me about the more important things in life.

Imagine a dad that just barked orders and didn’t interact with his kids.

That would be lame and you can add that dad to the list of boring dads.

That’s not always the case though, as most dads are actually entertaining.

If they’re not telling corny dad jokes, they’re finding one other weird way to entertain the kids.

Whatever weird act they are doing, I’m sure it wasn’t a part of their life before they created a little human.

This is a big reason why dads are weird, and if you can’t accept this, then there’s something wrong.

4. Dads Have to Play Different Roles

On top of having to entertain their children, dads have to be a different person every time they interact with someone.

When it’s time to entertain like I just mentioned, you do exactly that.

When it’s time to discipline, you show them who’s boss.

And, when you’re at work, you have to get your head into the game or you’ll be lost.

Imagine having to be a different person all the time?

It’s not easy and yes, it would make any person weird.

I guess you can say that being a better dad requires you to be a real-life Superman.

5. Some Dads Are Just Weird

Not everyone can be cool, regardless of whether they are a dad or not.

Some dads, and people, in general, are just born weird.

And, once again, that’s okay.

Weirdos are necessary in this world or things wouldn’t be the way they are.

I have a bunch of weird friends and although others might not like them, it doesn’t mean you need to copy them.

And, if some of you don’t seem to have any weird friends, today would be a great day to look in the mirror.

You, my friend, are the weird one that others mention.

But hey, it’s none of your business and you shouldn’t care what other people think.

Conclusion – Why Dads Are Weird

Whatever your thoughts might be, everyone is weird in their own way and it’s not just dads.

There’s not one specific reason as to why dads are so weird and I guess you can say it will always be a mystery.

However, I don’t see anything wrong, and I think dads deserve a lot of credit for being able to adapt to life as a parent.

They have more on their plate than any of you single men can imagine, so accept who they are now and don’t give them crap for anything.

Dads come in all shapes and sizes.

Some are nice and fit with a decent day job, and others are not so fit and are stay-at-home dads.

Whatever way they come in or how weird they are, remember that they’ve made one of the bigger sacrifices anyone could make.

Now, you tell me.

Wealthy Affiliate Review: 21 Facts to Know in 2023
Next Post:Jarsty Review: 10 Things to Know Before Buying